I wonder what goes through the mind of the infected liberal policy wonks that truly think they can solve the ills of the world through the law. While certain injustices do deserve the attention of lawmakers – instances where discrimination occurs due to one’s religion, color, or sex, a question arises of whether one could (or should) work to legislate away physical inequities.

Now I am not referring to current laws regarding ADA for the truly physically handicapped, I am talking about the physical appearance (or lack thereof) from one person to another. The traits that make us unique as individuals. Let’s face it, some of God’s children have a few more physical assets than others, some are dealt with issues of extreme weight, poor health, etc. I label it under the category of “Life is not Fair”. You can just feel the hair start to stand on the necks of liberals right now….. 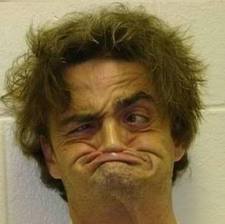 Our society has always fawned over physical beauty. It impacts how we view athlete’s ability to perform their sport for our favorite team, health aides are sold using “beautiful” people, movie stars with more eye appeal get more of the big screen, etc.  Currently, one Mitt Romney is leading the Republican Presidential Nominee field with the help of the fact he is a handsome lad and orates well. Were Romney uglier than a wombat with his legislative record, I would daresay he would not be in the field of contention.

And that is the very point that the Sensitivity Police are now moving to make law – that everyone who is not “beautiful” should be given a legal handicap to “equalize’ the playing field. Oh yes – you might want to grab some duct tape to keep your head from exploding. While the concept of giving everyone a fighting chance over looks or lack thereof, taking to the halls of Congress is getting a bit wacky.

This was brought to my attention today when I was solicited for a trade seminar on new insurance coverage to be offered to offset new laws in the area of “Appearance Discrimination”. What? Just saying the words made my mouth feel violated and I wanted to brush my teeth and tongue.. While I focus on energy and fuels now, I still have a role in our insurance operation and have to stay up to date. What I was sent to review was more than alarming – it was scary. Here is an excerpt of the article I was sent:

Welcome to the brave new world of beauty bias law.

Some say that beauty bias is the last acceptable form of discrimination, but that might be changing. Studies now show that less attractive people suffer tangible, measurable disadvantages in the workplace, from being passed over in hiring and promotion to decreased pay, to being taken less seriously in all aspects of business. And now, the law is taking notice.  One state and six counties and cities in the U.S. have instituted appearance discrimination laws, but lawsuits have been filed all over the country.

Wait – you mean if my face can stop a clock and the weight scale screams “get off!” then I cannot be on the cover of Sports Illustrated Swimsuit Issue??!!!

No, not currently Broom Hilda.

At least not yet.

So what’s next – you can no longer choose your soul mate if they are pretty or buy items how and where you want because a pretty person MIGHT have influenced your decision or you might not choose to eat at an establishment because the human Seabiscut handling food sweats more than a fat cat in Chinatown? Is that a crime?

But it could be coming……